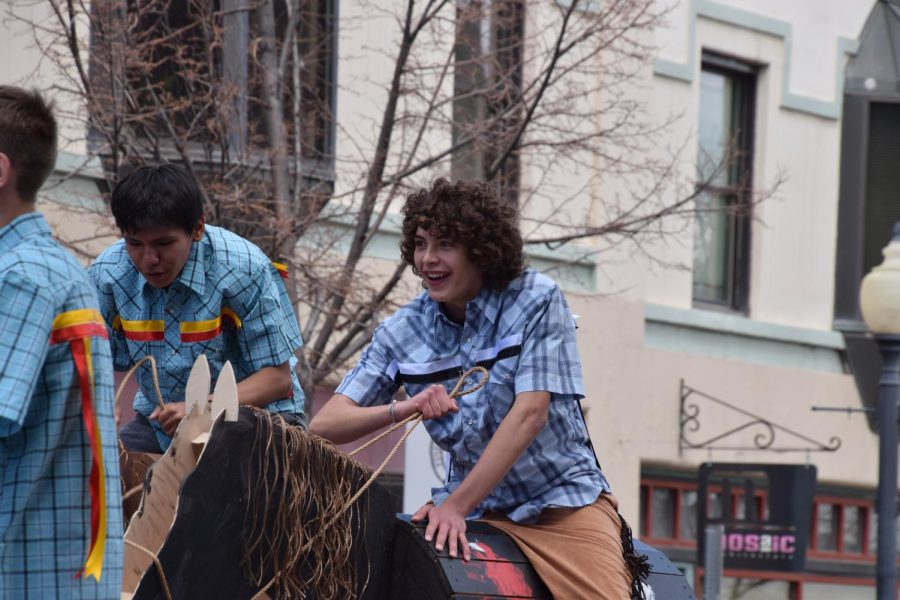 The impressive floats, the bright colors, and the excellent marching bands from both Helena High and Capital High at this year’s Vigilante Parade brought a smile to many faces on Friday, May 6th. Of course, many were smiling because this year marked the return to the parade’s traditional downtown route. And more excitingly, this was my first Vigilante Parade! In fact, it was my first parade!

It was a first for others as well. Trenton Salway, a sophomore, took part for the first time this year.  Salway said he was excited to see how people would react to seeing his float. “When I was a kid, it was always exciting to see the floats, and what people would come up with, and how would they do it,” Salway said.

One of Salway’s float partners, Ace Dolecheck, a junior, said that one of the main reasons that they chose Indian Relay as their float was because he “had cultural identity in mind, and I think that’s a very important thing for everybody to have.” And luckily for Salway and Dolecheck, they won first place in the category of American Indian and won an undisclosed sum of prize money.

Now, what about those who are returning to the Vigilante scene? Junior Tom Whitaker returned this year as a member of the band. “Walking in the parade was a bit special as it showed that all of us [band members] had enough talent to be a part of this big thing. We even had people complaining about how the parade was too quiet after the band passed by,” Whitaker said.

Remarkably, the first ever Vigilante Parade was held in 1924, making this the 98th parade. It is hard to believe that in only two years, the Vigilante Parade will be 100 years old! Vigilante holds a special place in the hearts of residents of Helena, Montana and will continue to hold that place for many more years to come.