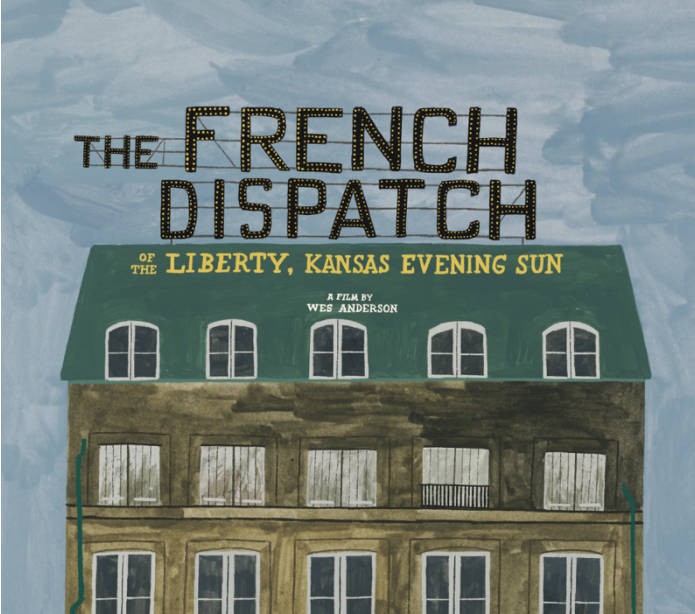 After less than a year of writing for the school newspaper, I consider myself something of an expert journalist. As you can imagine, I have been obsessively searching for movies that accurately portray my journalistic experience. Finally, I found it in The French Dispatch, a film by the legendary Wes Anderson, known for his films The Grand Budapest Hotel and Fantastic Mr. Fox, among others.

The French Dispatch follows three staff members of a French magazine and their three respective articles. The first, titled “The Concrete Masterpiece” follows an eccentric artist and prison inmate, Moses Rosenthaler (Benicio Del Toro) whose painting is bought by art dealer Julian Cadazio (Adrien Brody.) This article was written by J. K. L Berensen (Tilda Swinton), and the story sometimes pauses to hear her lecture at an art gallery.

The next segment is about Lucinda Krementz’s (Frances McDormand) article, “Revisions to a Manifesto,” which details college student protests that erupt into the “Chessboard Revolution.” At the forefront is Zeffirelli (Timothée Chalamet). Krementz has a short romantic relationship with Zeffirelli, while also editing his manifesto. McDormand brings an excellent air of sternness to the character. This relationship upsets another revolutionary named Julliette, who is in love with Zeffirelli.

The final segment is “The Private Dining Room of the Police Commissioner.” Roebuck Wright (Jeffrey Wright) tells the story of his private dinner with the commissioner of the Ennui police. Chef/police officer Lt. Nescaffier has prepared the dinner, which consists of foods specially engineered for police work. Their dinner is rudely interrupted by the kidnapping of the commissioner’s son, Gigi. The kidnappers demand the release of an accountant of the criminal world, nicknamed “the Abacus,” who is being held in solitary confinement.

This anthology film takes place in the mid-twentieth century, and Anderson’s impeccable production design creates scenes bustling with details. This is the type of movie where each time you watch it, you see a new gag in the background.

The acting is excellent as well. I particularly enjoy the performances by Timothée Chalamet, Adrien Brody, and Jeffrey Wright. Brody especially stands out; his line delivery reminds me of George Clooney in Fantastic Mr. Fox and Edward Norton in Isle of Dogs.

Each segment has touching parts, some that nearly made me cry, and the end of the film will leave you with a wonderful feeling at seeing all these different people come together over their shared lives’ work feeling. The credits include a tribute to a list of writers, many affiliated with The New Yorker, on which The French Dispatch is based on. His detail is what really gives the film its charm. The French Dispatch is a love letter to journalism that any fan of Wes Anderson will adore.