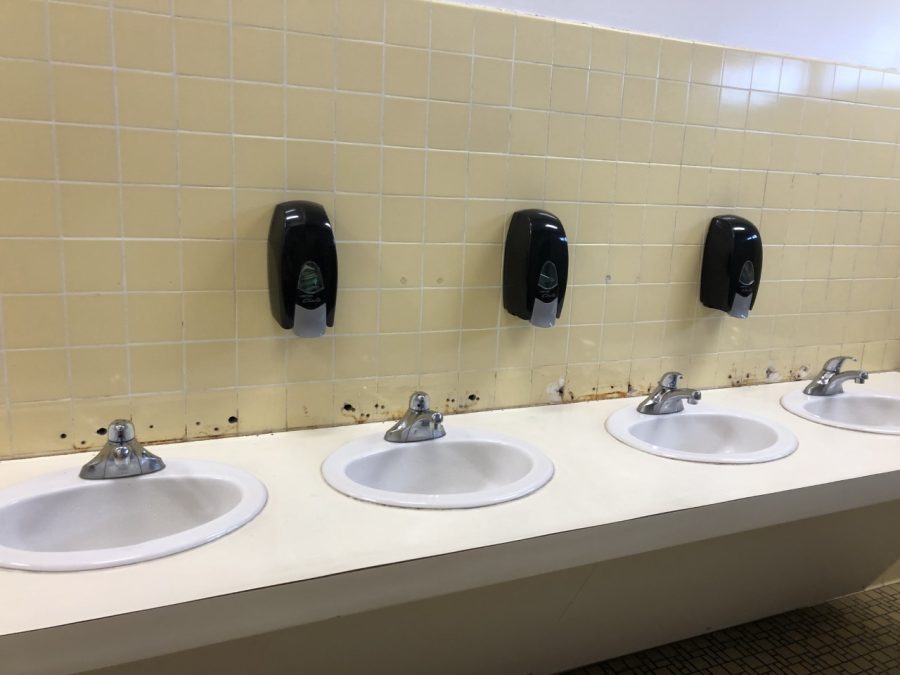 These sinks in the girl's bathroom are missing tiling because the tiling rotted and had to be ripped out.

I have been a member of the Helena Public School District for my entire educational career, and I have been attending Helena High School since I was a freshman. As I get ready to begin the next chapter of my life and leave for college, I have come to the realization that my school needs help before I abandon it. I want to leave Helena High better than I found it, and I want to take pride in where I come from. Unfortunately, I feel like that cannot happen without some serious intervention by the Helena Public School District administration and the Helena community.

For those who are unaware, Helena High School was built in 1955 after the original high school (now serving as Helena Middle School) was rebuilt after an earthquake. Since then, our school has survived fires and floods, but the original architecture is still standing. There have been renovations during Helena High’s history, such as two remodeled bathrooms and new security doors. However, these renovations do not make up for how much of the school is still in desperate need of repair.

So, I decided to spend one lunch period taking some photos of my school. It took me about 25 minutes to collect over half of my total photos. What started as a running gag amongst my friends and I became something much deeper and much more appalling very quickly. I was so angry that my peers and my teachers had become so desensitized to the potentially dangerous conditions we were learning in. Above, I have collected 135 total photos of the state of disrepair Helena High School is in. Included in these pictures are broken intercom systems, renovated bathrooms that have since been closed to students, water bottle stations with dirty filters, mismatched tiles that have been replaced due to asbestos, lights that have caught on fire in classrooms with students present, and a plant growing out of the carpet in a teacher’s classroom.

The renovations Helena High School has received are welcome, but unfortunately are not immediate renovations, like the potential amount of lead in our school’s water. To me, this issue is much more relevant now after Montana schools were required to get their water tested for lead. Helena High School’s results still have not been reported almost eight weeks after the deadline to do so, but so far, an alarming number of schools have reported dangerous levels of lead in the school’s drinking water. This issue is made even more alarming based on the fact that Helena High’s water fountains have consistently had dirty filters for years, and only just got changed before the upcoming lead testing. No student should have to be concerned about drinking lead with their water, and no teacher should have to buy their own filters because of the unsafe school conditions.

This is no longer a joke, and this can no longer be ignored. The teenage students of the community deserve better and deserve a space to learn that does not put their health at risk. This goes far beyond simple custodial fixes, and it is not something that can be bandaged repeatedly in hopes that it heals on its own. The district keeps on spending exorbitant amounts of money on one renovation at a time in our school, for example, the new security doors at schools which were funded by a $63 million dollar bond in 2017. Once again, these renovations are greatly appreciated, but they happen too infrequently to make any lasting impact on the overall quality of our school. Solving one problem does not cancel out another problem, especially when the safety of students in their school is at risk. The only option that will ensure continued health and school pride amongst Helena High School students is a total remodel of our school.

I am not naïve; I know that a complete remodel is expensive and complicated to plan. However, the amount of money the district has spent simply slapping Band-Aids on our school adds up to even more money in the long run and is nowhere near as efficient of a fix. Numerous elementary schools in the Helena Public School District are getting completely remodeled, so I ask, when will it be our turn?

This is not simply an issue with custodians, because they are not to blame and end up dealing with the brunt of these fixes. This is not simply an issue with Helena High School administrators, because they realize that our school is coming undone. This is an issue with the community. Without the community voting for bonds that rebuild schools (like Central Elementary School), our school district does not have the funding to do so on its own. The children of Helena deserve better, and it is up to their neighbors and fellow community members to allow their schools the funding they need for a remodel. The community needs to be aware of the way things really are in our schools, and they need to know where they are sending their children to learn each day. Without the Helena community’s interest and support, nothing will be done. Public interest and funding for a new school is not a request anymore, it is a requirement.

I will not be attending this school for much longer, but the underclassmen in my newspaper and choir classes will be. My little cousin will be. My little brother will be. It is for them that I write this. I want them to be able to take pride in being a Bengal, and I want them to walk the hallways with their heads high and without having to look at water-stained ceiling tiles. It is for the future of Helena High School that I write this, and it is for them that I hope someone listens.