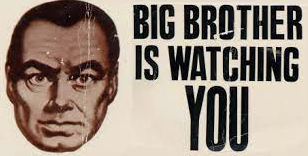 The world “Orwellian” has become synonymous with images of mass surveillance and a society of drone-like people with no free thinkers or free will. The word comes from George Orwell’s 1949 novel 1984, which follows Winston Smith and his lover, Julia, on their mission to overthrow The Party. In a world where his own mind is the difference between life and death, Winston risks it all to stand up for the past, present, and future.

In Orwell’s grim prediction of the future, (or the past to today’s readers) the Party took control after the revolutions of the fifties and sixties, where they carried out purges and killed anyone deemed an enemy of The Party. In 1984, 3 superstates, Oceania, Eurasia and Eastasia, are all at war with each other. Winston resides in London, which is in Oceania, where he works in the Records Department at the Ministry of Truth. In Orwell’s dystopian universe, the party controls all information and media. Oceania’s leader is referred to as Big Brother, and he allegedly led the revolutions and founded The Party. He appears all over posters and on the telescreens that constantly watch Oceania. If Big Brother makes a prediction, say about the chocolate ration increasing, which is later incorrect, it is Winston’s job to edit any article or book that contradicts Big Brother. The citizens of Oceania are forced to choke down these lies or they will be killed by The Party and erased from history.

While in an antique store, Winston buys a diary. Winston begins writing his true feelings about Big Brother, stating that he hates him and believes the past had better standards of living. He has no proof since the past has been altered countless times. While at work, a girl named Julia passes Winston a slip of paper which simply reads “I love you.” They meet up at a spot in the countryside, where they are safe to whisper their disdain for the Party. Winston returns to Mr. Charrington’s antique shop and decides to rent out the small room above it that Charrington and his wife once shared. Winston and Julia visit the room frequently, enjoying an illegal love affair.

1984 is a classic science fiction novel, and after reading it, I have mixed feelings. Several of its iconic ideas, like doublethink and thought police, have become a part of our modern lexicon. “Big Brother” is synonymous with government surveillance. The plot is tense, and Orwell does a fantastic job of putting Winston’s anxieties into words. The worldbuilding is fantastic, but the book has its problems.

One huge issue with the book is Winston’s character. Winston could have been redeemable if he had kept his terrible thoughts to himself. He could have simply been reckless and impulsive, but, instead, he has homicidal fantasies. He will take any chance he gets at assassinating his character.

Additionally, though this was more normal when it was published, modern readers will struggle with Winston’s misogyny. Early in the book, it becomes clear that he hates women because he sees them as submissive to The Party, but he never once considers that they could be putting on an act to survive. He does that exact thing, putting on a mildly optimistic face and going about his day to avoid being accused of thoughtcrime. It is very bizarre that Winston could not realize that there were other people in his position.

Then, when he meets Julia, Winston guesses that she is ten to fifteen years younger than him, which is an extremely uncomfortable age gap. When he meets her in the countryside (where he is trying to woo her) he says some truly vile things to her, including how he thought about bashing her head with a piece of cobblestone, among other things. Their entire relationship feels very creepy, but, alas, it is a core part of the story.

On her own, Julia is an incredibly intelligent and interesting character. She is much smarter than Winston and is obviously far more experienced in pulling off elaborate schemes to quietly thwart The Party. She could even carry out her plans without putting her life in danger, so if Winston had left finding a hiding spot up to her, their lives would have turned out better. She is said to be promiscuous because it gives her a feeling of freedom, since intimacy is prohibited by The Party. This makes her far more complex than most love interests in fiction, who are often relatively flat characters that represent a goal of the main character. In fact, if the plot of the book had followed Julia, we would have enjoyed a much more compelling central character.

Despite the flaws of its protagonist, I would recommend 1984 to any fan of dystopian fiction. It has some fantastic plot twists and Orwell has masterfully built a completely hopeless world. As said in the book, “There was truth and there was untruth, and if you clung to the truth even against the whole world, you were not mad.” The truth we should cling to is that 1984 is a timeless story, which will be remembered even when 2+2=5.