The Women: A Performance Worthy of Broadway 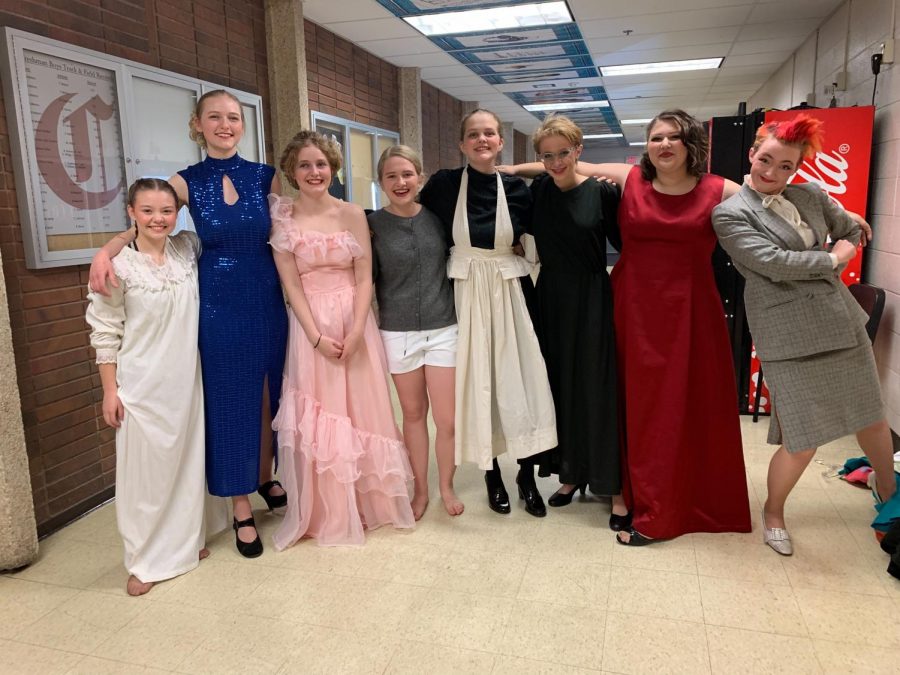 According to PBS, the origins of theatre can be traced back to the 5th century. Though not the foremost of entertainment it once was, being replaced by movies and TV, the art form is still practiced today. Thespianism is not just reserved for professional Broadway actors; it is practiced by local theater productions, and some high school students get in on the action as well. This November, Helena High and Capital High collaborated on a production of the 1936 play The Women.

The plot follows a group of socialite women in Manhattan as they navigate through pregnancies, motherhood, their husbands’ infidelity, and in, some cases, divorce. Although I feared a play written in the 1930s might be dull, the sarcasm and wit create a lively performance. This is in no small part thanks to the actors’ performances. Morgan Harris, a senior at Capital High, is a perfect fit for her role as Mary Haines. Her voice is vibrant and wonderfully captures both sarcasm and distress. Harris portrays great anguish in a way that is not too exaggerated or comical, which is a great feat. There is not a single weak performance during the entire production; every actor is giving it their all, as are the stagehands. They moved the props between acts swiftly and efficiently, which helped to not break the illusion of the play. The 30s music playing during the transition between acts kept the audience immersed in the play’s setting.

The costumes, designed by Brenna Holgate, a senior at HHS, elevate the play. The socialites’ complex dresses bring another layer to their characterization. Crystal Allen, Mr. Stephan Haines’ new wife, wears a blue, sequined dress in the final act. It shows how different her character is from Mary, who is modest and genuinely loves Stephan. Crystal, on the other hand, is flashy and explicitly states that she married for his money. In contrast, Mary wears a much simpler red dress at the end.

Period-specific details like 1930s salon chairs and telephones make the time period jump to life. Even on the shoestring budget of high school production, the set creates the atmosphere of affluent households of the 30s. The props mainly consist of chairs, but they vary enough so each room feels unique. Though the set background is made up of several panels with the same wallpaper to create the rooms, the set designers make it work. Each room has a distinct look because of the placement of the walls and the set pieces.

One scene where the performers and set are utterly amazing was when Mary confronts Stephan about him being unfaithful. This is the only scene with a male actor (Seth Campbell, a senior at CHS) and he knocks it out of the park. During the scene, a gossiping housecleaner retells how she remembers the conversation. She is seated with another woman at a table in the center of the stage. On either side of the table is a wallpapered panel, with three more panels to create a small room. In the room to the right stands Mary, and to the left of the table is Stephan. Harris’ acting is especially powerful, as she cries to Stephan that she wants a divorce. The highlight of the scene is when Stephan booms the words, “What does that matter when you are going to divorce me?” The anger in his voice sent chills down my spine. While there is a tinge of guilt in his delivery, it almost does not matter when compared to the overwhelming grief in Mary’s voice. This is an all-around excellent scene that succeeds in giving Stephan’s character a bit more depth, while still showing how much his actions hurt Mary.

The Women was a pleasant surprise, giving depth to characters that could have easily been unlikable. Socialites in a time where the entire world was going extreme poverty and was about to go into war could be flat characters, but the acting and writing made them feel human. Despite her financial standing, Mary is tragic, and the audience feels pain in her voice. Seeing her gain confidence in her life as a single mother felt earned. This was an incredible viewing experience and everyone who contributed should feel proud of what they have created. To the thespians of Capital and Helena High, I am looking forward to your next performance.