On the Move with Caitlin Matthews 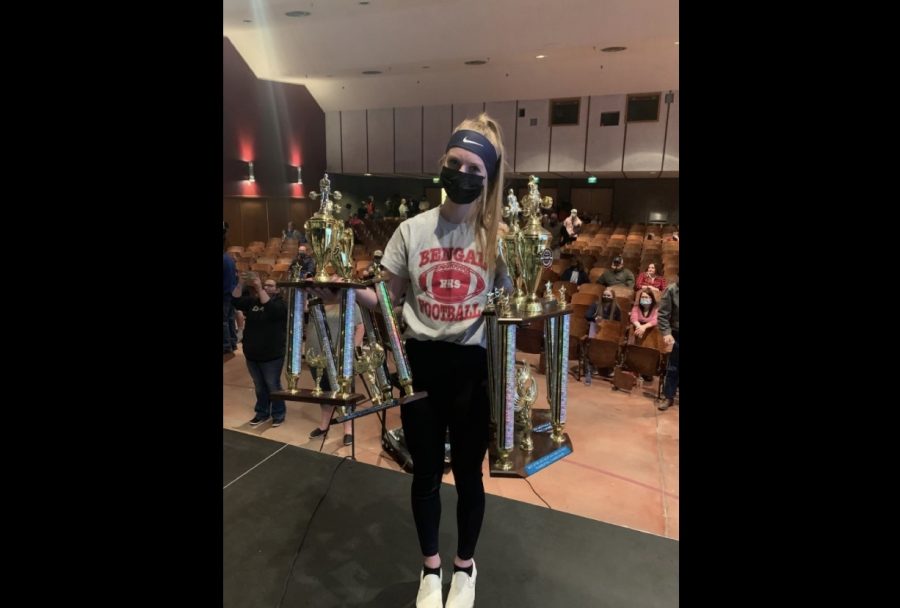 Senior Caitlin Matthews has had a busy few years, and she’s not done yet. Not only is Matthews a manager of the football team and a member of mock trial, but she also participates in (and wins) state and national powerlifting competitions.

As a football manager, Matthews takes care of getting gear for the players, filming their games and practices, keeping time, and breaking down their plays. This is her second year as one of the managers. “It’s the closest thing to playing football that isn’t actually playing football,” Matthews said. Matthews plans to continue managing football as she has been offered the same position at the University of Montana next year.

Outside of sports, Matthews also enjoys competition in the courtroom. Matthews has competed in mock trial for two years and is going into her third after joining the team last year in Montana’s first trip to the national competition. She enjoys the competition of going up against the other teams.

After Matthews quit ballet, she fell in love with powerlifting. She said after taking weight training freshman year, her passion for powerlifting was undeniable. Matthews has been powerlifting for three years and has now mastered her workout routine. She practices powerlifting 5 to 6 times a week where she alternates working out her arms, legs, and back. Matthews describes powerlifting as “an individual sport where you can focus on yourself.” She likes that “it’s about mental toughness and how far you can push yourself.”

For those unfamiliar with powerlifting competitions, they are as intimidating as they sound. Competitions consist of three rounds in which competitors attempt their max squat, bench, and deadlift. Matthews has had undeniable success in powerlifting, winning the state championship three times through club competition. Last March, she took 1st place in her weight class, as well as won best deadlift, squat, and bench and best overall lifter. She plans to continue powerlifting through college but mentioned there are fewer competitive opportunities at the collegiate level.

As for the future, Matthews says she is torn between studying law or exercise physiology. Caitlin Matthews has clearly made her mark on Helena High and will continue to do so as she prepares for this year’s mock trial season and wraps up the football season.