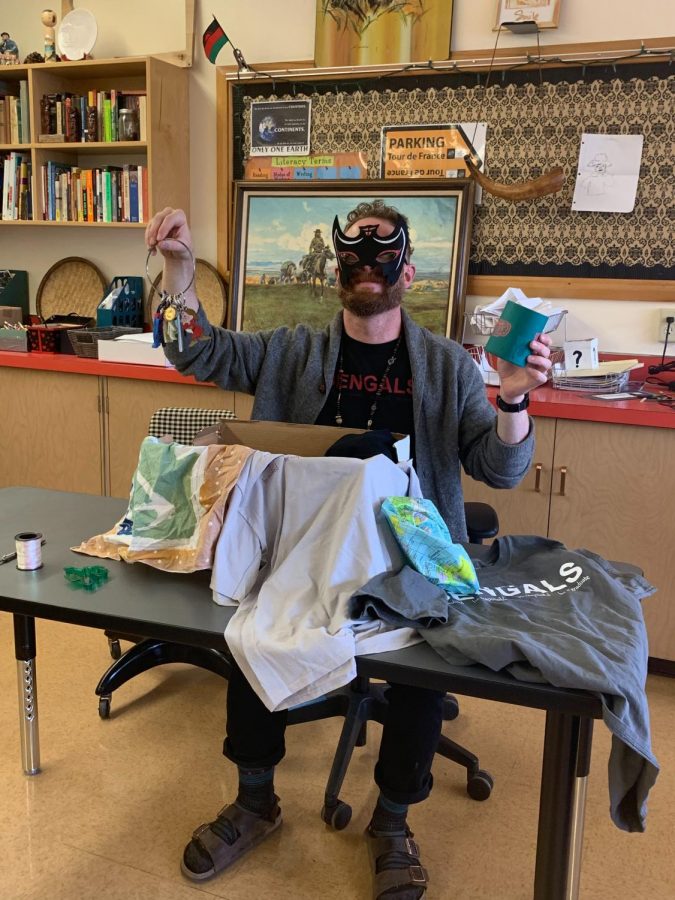 As the last moments of the Kahoot game end, the podium lights up the board. The top three players are announced and are often rewarded with gloating privileges and sometimes even some extra credit. Those who happen to have Mr. McKissick as their social studies teacher, however, are rewarded differently. The winners are presented with a box, filled with oddities such as rubber band balls, a collection of key chains, and even some shirts.

When rummaging through the box, one finds a worn thermos with the words “RADER FARMS Family Operated Since 1941, Lynden, WA” plastered on the side in maroon letters. Rader Farms is huddled in the city of Lynden, Washington, known for its Dutch influence and producing the most raspberries in the United States. Therefore, it is no surprise that Rader Farms is a raspberry farm. What is surprising is that this is where Mr. McKissick grew up.  Growing up in a small farming town prompted him to seek life in a larger city with a similar environment to Washington. This search led him to Helena, Montana. What first looked like an average item actually reveals information about Mr. McKissick’s childhood and even the rest of his life.

Also resting in the box, is a large silver ring lined with various keychains. One key chain has the word “HY-TEST” written in green letters. Above it is the word “FLORSHEIM” scrawled in white. The words are inside a small orange square inside the keychain’s white interior. A white gear cuts across the square. It has a black casing around it, with a silver handle to attach it to keys. Upon research, one finds that Hy-Test is the name of a shoe company headquartered in Milwaukee, Wisconsin. The company specializes in safety shoes designed for labor. According to Mr. McKissick, the keychain came into his possession (along with the rest of the keychains) via Mr. Sampson, a science teacher at Helena High.

Each item has its own story to tell. From a raspberry farm in Washington to a shoe factory in Wisconsin, these objects have been on a journey that ended in the box of mysteries. Some remain for months, or even years. Others may be whisked away by a student in a matter of days or weeks. They might end up in another box, in someone’s attic or basement. Maybe a keychain from the box of mysteries is passed down from driver to driver, until it finally has a permanent set of keys to call home.