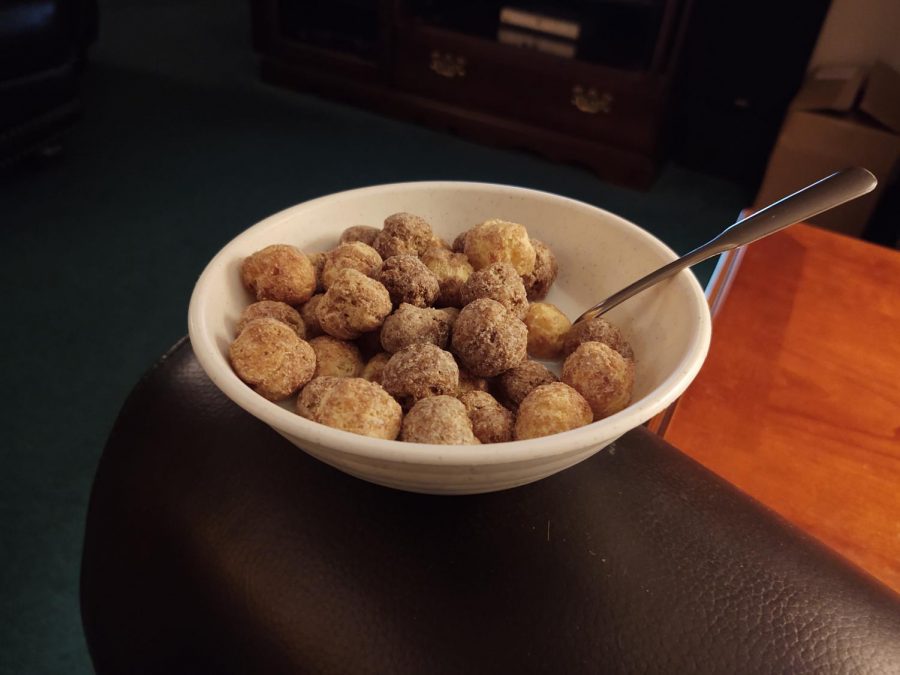 Here in America, we live by the value that bigger is always better. That’s the only logical explanation that I can come up with as to why General Mills decided to release Reese’s Big Puffs. Reese’s Puffs are already a delicious cereal, so making them four times larger must be better, right?

Reese’s candy already has a version of their famous Reese’s Cup available in an unnecessarily large version called Reese’s Big Cup. Therefore it makes sense that Big Puffs exist now. Actually, no, it doesn’t. They are silly and I feel silly because of them.

The bright orange and yellow color scheme with the iconic Reese’s logo is the trademark of Reese’s candy and Reese’s Puffs cereal. The Big Puffs box is identical to Reese’s Puffs box in that it features the Reese’s Puffs logo in yellow on an orange base, with the cereal featured on the front. The only difference is that Big Puffs boasts that they’re “way, way, way bigger than normal Reese’s Puffs” and instead of showing a bowl of the cereal, it shows a single large puff.

Big Puffs are technically a bit better for you nutritionally than Reese’s Puffs. A single cup of Reese’s Puffs is 170 calories and 12 grams of sugar, meaning you’re essentially eating a bowl of candy for breakfast. Reese’s Puffs Big Puffs are 160 calories and 12 grams of sugar for one and a third cup of the cereal. Meaning, for a third cup larger serving, it’s the same amount of sugar and ten less calories. However, this is unsurprising because since they are so large, you don’t get quite as much cereal in your bowl.

Upon first glance, this cereal is almost annoying. The size of the puffs are so large that it’s quite literally agitating. It’s so impractical and unnecessary and honestly makes me angry. Instead of tipping the box of cereal and hearing the pleasant sound of corn puffs bouncing into your bowl, you hear a few dense thunks, and that’s it.

They look exactly like a normal Reese’s Puff corn puff, with some balls being a light brown and others a darker brown, and a very visible sugar frosted coating on the outside of each piece, but insanely bigger.

The flavor is exactly that of normal cereal. The taste of the actual Reese’s Peanut Butter utilized as an ingredient is extremely prevalent, but no real chocolatey flavor as advertised. The texture, however, is admittedly satisfying. The best way to describe it is as a denser, sweet peanut buttery Cheeto Puff. The milk, like normal Reese’s Puffs milk, isn’t special, but I will hand it to Big Puffs, the texture is great, and they never get soggy.

If you’ve ever enjoyed a Reese’s Peanut Butter Cup, you’re familiar with the crispy texture of the peanut butter center, and, this comes through with Big Puffs. After sitting in milk, the outside of the ball becomes softened, but the interior remains crispy, so it sort of feels like you’re enjoying actual Reese’s Peanut Butter.

I hate eating this cereal. It tastes good, just like Reese’s Puffs, but the experience is infuriating. Large size cereal pieces are hit and miss. Frosted Mini Wheats are perfect because a single biscuit fits perfectly on your spoon and you get a pleasant bite of food. Big Puffs are too large to fit more than one ball on your spoon but aren’t big enough to get a pleasant bite of cereal.

Reese’s Big Puffs are a pointless cash grab that shouldn’t exist and that I shouldn’t have to finish an entire box of. However, I can’t say I hate them because I love Reese’s Puffs, and these are the same flavor. I just very much dislike the experience. Pass on these, opt for normal puffs.