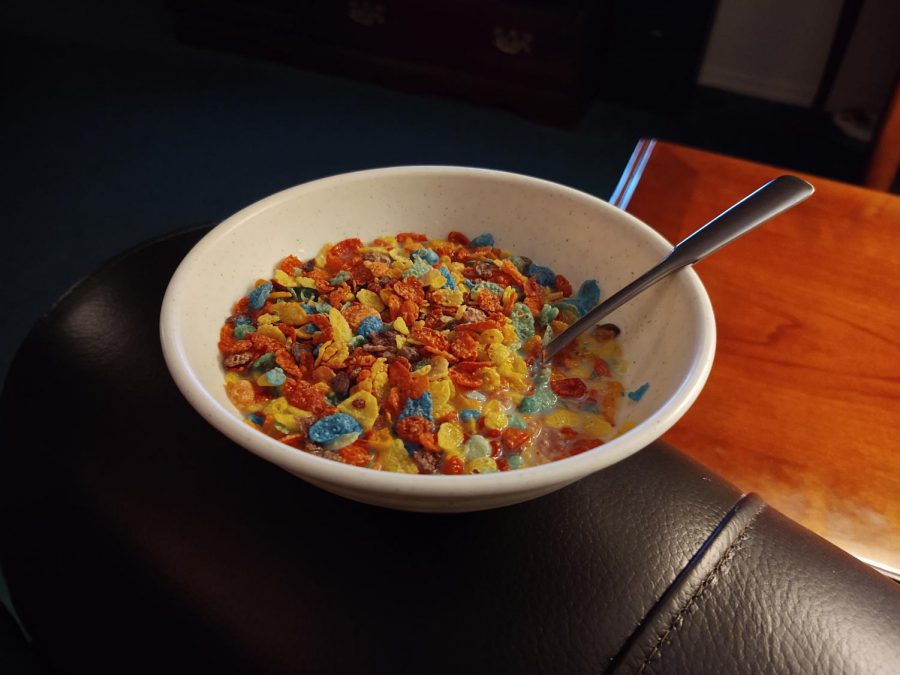 Are you team Cocoa, or team Fruity? Of all the cereals in history and all the marketing ploys and campaigns, no company has executed a gimmicky cereal as perfect as Post has. Not only are the cereals based on the popular children’s cartoon The Flintstones and utilizes its characters as mascots, but it has also featured famous athletes and public figures as promotions. Seasonal releases, fun variations, and many other marketing ploys to get people to buy the cereal.

Fruity Pebbles are one of the most unique and interesting cereal experiences one can have. Since 1971 this popular breakfast has been brightening people’s bowls and mornings with its display of neon, artificial colors and fruity aroma.

As if you needed a description of the vibrant Fruity Pebbles box that you’ve undoubtedly had in your pantry at some point, each one is a bright red color, feature the Flintstones characters Fred Flintstone and Barney Rubble with a bowl of the cereal. It really hasn’t changed a whole lot in design over the years, but it has gone through minor changes like featuring different additions to the box, like John Cena when he partnered with the cereal.

In the Pebbles family of cereal, there are many varieties including, of course Cocoa and Fruity, Marshmallow Fruity Pebbles which contains marshmallows, and Magic Fruity Pebbles released this year that are all pink colored and turn the milk a blue color as its selling point. There are also many discontinued variants including Dino Pebbles, Bedrock Blizzard, Winter Fruity Pebbles, Cinna-Crunch Pebbles, Peanut Butter and Cocoa Pebbles, Summer Berry Pebbles, Ice Cream Pebbles, and Bamm-Bamm Berry Pebbles, just to name a few.

The smell of Fruity Pebbles is one that’s hard to forget. It’s “fruity” and sweet, although there’s no possible way to identify what sort of fruit it’s attempting to replicate. It will burn into your memory and draw you in again and again. The pieces are tiny and light crisp rice flakes. They are in a rainbow of colors and look as though you’re about to dig into a bowl of pure joy and happiness.

The taste is exactly like the scent. It’s fruity, it’s sweet, it’s artificial, and it’s delicious, just like you’d want and expect. Adding milk, you don’t lose any flavor whatsoever and still have a delicious breakfast. Each spoon is really light and airy, yet somehow still satisfying. It’s unlike any cereal in terms of both flavor and texture and provides a very different experience than you may expect.

Where this cereal falls a little flat, is that it goes soggy so unbelievably fast and after a couple minutes, you’re left with a bowl of soggy, fruity paste. It isn’t bad, just not necessarily ideal, especially for slow eaters. Still, even after it’s gone soggy and left to sit for an extended period, it somehow still retains its flavor. I have no idea how Post does it, but other cereals should take note.

It’s hard to describe what the milk tastes like exactly once the cereal is finished, because if you add milk to Fruity Pebbles, the milk and cereal literally meld into one entity and are no longer distinguishable from one another. If you happen to know what Fruity Pebbles milk tastes like, please let me know.

Overall, Fruity Pebbles is an awesome fruity cereal and I highly recommend it. It doesn’t get much more artificially flavored, colored, and scented than this, and that’s what makes it perfect. It’s unique, sweet, and it’s fun.