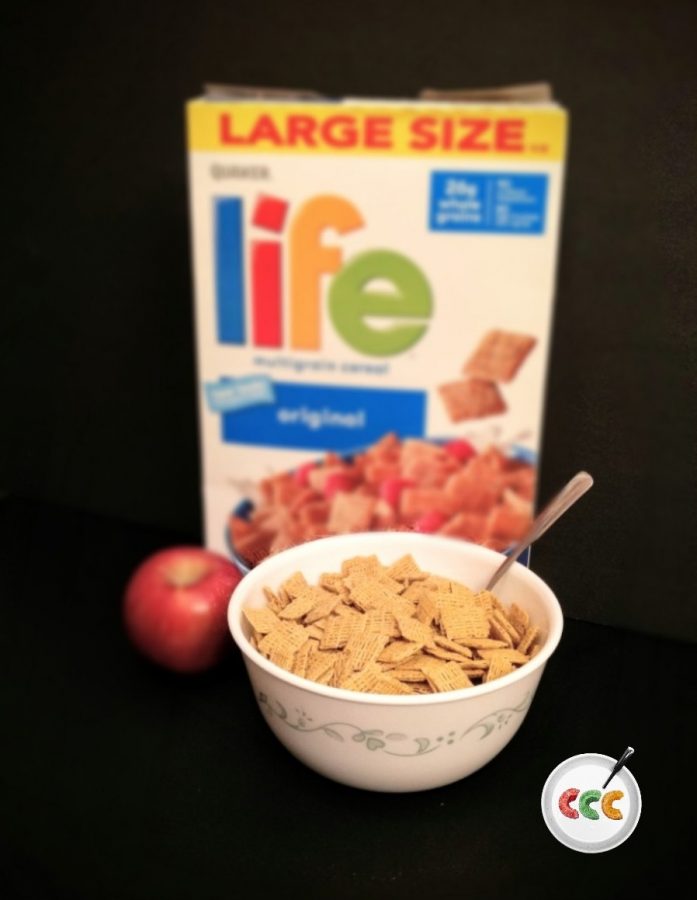 Quaker’s Life cereal is that one your grandpa always has in his cupboard, but the one you never wanted in yours as a kid because it isn’t as fun as Lucky Charms, or as sugary as Cinnamon Toast Crunch. It’s often dumbed down to a “boring,” “adult,” or “old person’s” cereal, causing the kiddos to often pass on it in the cereal aisle, and opt for Cocoa Puffs. Maybe it has something to do with growing up and maturing a bit, I said a BIT, but in my opinion, this cereal isn’t half as bad as we thought it was as kids.

Way back in the day, 1961 to be exact, the Quaker Oats Company first introduced this cereal to consumers. A variety of advertising slogans like “Life is full of surprises” and of course the 70s ad campaign featuring “Little Mikey” have accompanied this cereal, and it’s still around today. Talk about timeless! While Quaker isn’t as well known for their cold cereals as they are for their other products, other cereals of theirs include Quisp, Corn Crunch, King Vitamin, and Oatmeal Squares

Maybe it’s all the health benefits like “26 whole grains” and “multigrain cereal” that are boasted all around the box that drove our attention away, or perhaps the fact that there’s no goofy, cereal-stealing cartoon bunny to be found anywhere, but whatever the reason was, it was bogus. This cereal is kind of really good. While the pieces aren’t in any particularly fun shapes, like other brands, this one isn’t a snoozer either.

Life cereal’s box design is super basic, but classic. It’s got a nice retro vibe going on throughout its white box with the multicolored Life logo, and a bowl of Life with some berries featured in the foreground. Along the side you can see the other varieties of Life flavors including strawberry, cinnamon, vanilla, and chocolate.

26 whole grains, no artificial sweeteners, no high fructose corn syrup, multigrain, heart healthy, excellent source of 5 B vitamins, and good source of calcium are claims you will find littered all over this box. All this, and at 160 calories per one cup serving, you’re looking at a decently healthy breakfast cereal here folks. You may be shocked to find out, however, that this cereal is not as sugar-free as you may have once thought. In fact, there’s eight whole grams of sugar in each serving, which is a lot more than may have been expected and makes for a somewhat sweet cereal.

There’s not a super strong scent upon opening the box and the seemingly dull pieces may throw you off at first, but don’t be fooled. Each piece is square, with a plain tan color and a fine, checkered pattern. They’re thinner than Chex pieces, but other than that the two resemble each other rather closely.

Not a whole lot of flavor dry, but the texture is satisfying, and when you add some milk to it, the flavor is really brought out. It isn’t a bowl of sugar and sweetness, but there is just a touch of sweet, just enough in my opinion. The flavor is enjoyable and doesn’t feel like you’re filling yourself with junk first thing in the morning. The texture post-milk is also nice, except this cereal is notorious for how soggy it gets. Maybe I’m crazy, but this is one cereal I kind of enjoy soggy. The milk afterwards gains a little of the cereal’s flavor, but not too much

For a cereal that is somewhat healthy for you, Life is still super tasty and very satisfying. We steer away from it because it’s “healthier” and not as exciting as other cereal varieties, but it’s awesome! I haven’t tried the other flavor varieties of Life, but if they’re anything like the original, I’ll be very pleased. There’s not a whole lot more to say about this cereal other than that. I’m pleasantly surprised at how wonderful it is every time I have it. For that, I give Quaker’s Life an 83%, B rating and highly recommend it to anyone who wants a really nice change of cereal that isn’t going to give you a sugar rush-at least not much of one.