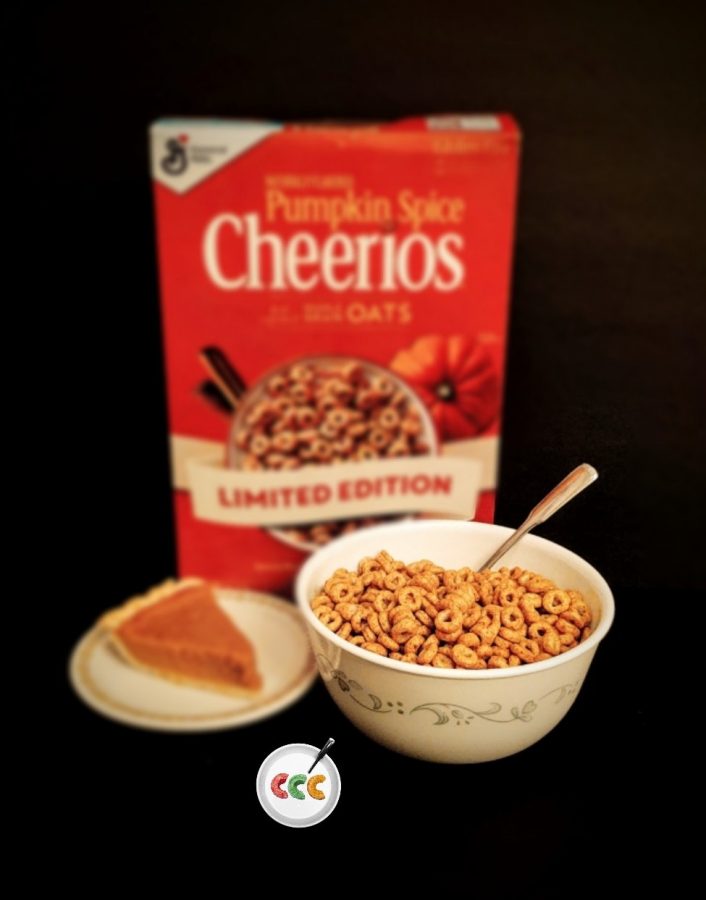 Rejoice seasonal enthusiasts! Fall is officially here, and we all know what that means. Hark, General Mills has brought back Pumpkin Spice Cheerios! If you need just a little bit more pumpkin spice in your morning aside from that Starbucks latte in your hand, you could now have it in your morning cereal as well.

In the time of year dominated by all things pumpkin, cereal companies embrace the fall theme with cereals like Pumpkin Spice Life by Quaker, and Pumpkin Spice Frosted Mini Wheats and Special K, both by Kellogg’s. General Mills’ attempt at the trend was first introduced in 2016 and has seen a reintroduction around this time every year since.

Advertised as a “Limited edition sweetened whole grain oat cereal with natural pumpkin flavor and cinnamon, nutmeg, and cloves,” this cereal sounds amazing. In addition to the well-known Cheerios logo, the box features warm fall colors, cinnamon sticks, and a pumpkin. The packaging and advertising are very festive and fit in with the rest of the Halloween decorations already up around the store.

Being a Cheerios product, this cereal isn’t completely horrible for you. Of course, in usual Cheerios fashion, it’s made with whole grain oats, which is always a plus. It’s higher in calories and sugar than normal Cheerios, however, clocking in at 140 calories and 11 grams of sugar per cup.

And that’s about where the positive aspects of this cereal come to an end. I opened the package, took a whiff of the amazing autumnal aroma of cinnamon and pumpkin, and got my hopes up for nothing.

I tasted it dry, and it was okay but nothing super special. It didn’t scream “pumpkin spice” but instead kind of just whispered it. I hoped that adding milk would amplify the flavor and make it better. Nope. In fact, the exact opposite happened. What little flavor was there to begin with washed off, and I was left with a bowl of some of the weirdest, blandest Cheerios I’ve ever had.

Very little of the pumpkin spice flavor remained on the actual Cheerios once milk was added, and instead went straight to the milk itself, turning it a light orange color. To be fair, the milk at the end of the bowl was actually pretty good. It tasted somewhat pumpkin-y and left a little pool of the cinnamon sugar at the end exactly like Cinnamon Toast Crunch does, but the milk doesn’t excuse the cereal. The Cheerios were not great.

They went soggy quickly and weren’t satisfying at all. I haven’t tried any of the other pumpkin spice flavored cereals on the market just yet as they’re hard to come by right now, but I hope they hold up a little better than this.

General Mills is a great company that produces some awesome cereals, but sadly Pumpkin Spice Cheerios just isn’t one of them. I gave them a shot because, like the rest of everyone else in America, I enjoy pumpkin and pumpkin spice flavored things, and look forward to fall when they come out, but this just didn’t do it for me. I’m glad I didn’t get a family sized box of this one and put myself in the position of having to begrudgingly pour myself a bowl of this in the mornings just to get it finished. The 65%, D rating may even be a bit generous, but that’s what I’m giving it. I won’t buy this again, but if you’re a fan of pumpkin spice flavored milk and a bland bowl of soggy oat cereal, this is right up your alley.