Does New Technology in Cars Make Us More Distracted Drivers? 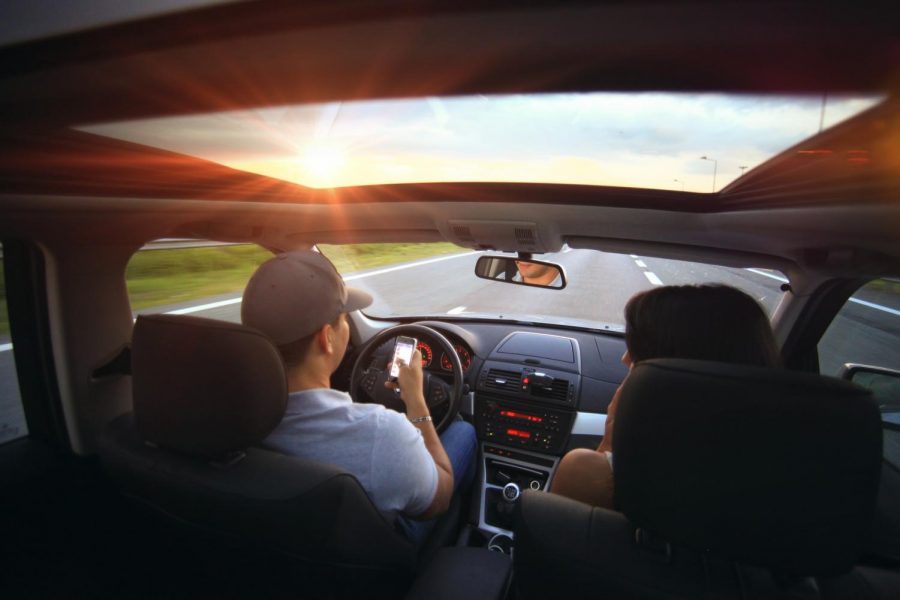 Image by SplitShire from Pixabay

Like many of you, I am on the home stretch to finally get my driver’s license. As I learn more about the rules of the road, something has started to bug me more and more: people on their phones while driving. Seeing drivers staring down at a phone screen rather than out their windshield makes me wonder, how did distracted driving become so prevalent? Our addiction to smartphones plays a role, of course, but a hidden cause could be that today’s more modern cars make it feel less dangerous to drive while distracted.

This worry came to my attention when an ad for a Hyundai Kona came on during a Hulu commercial break. In the commercial, the car is filled with a group of four young adults, all laughing, chatting with one another, and leaning into the front seats to take selfies. The driver is completely distracted and nearly clips another car while trying to change lanes. However, before the driver can hit the passing car, the built-in lane departure warning beeps and corrects her mistake. This is where the narrator pops in, saying, “The Hyundai Kona, the first car in its class that pays attention, even when you don’t.”

This statement bothered me and got me thinking about how many people abuse such technology. Don’t get me wrong, these features sound great in theory. I mean, who wouldn’t want to be able to freely talk and drive at the same time? Who wouldn’t want to put their feet up on the dashboard and kick back as their car drives them around?

Self-driving cars are regarded as the future of driving, with the expectancy of seeing a lot more of them on the road. Twenty years ago, this kind of technology was straight out of a sci-fi movie. And maybe that’s where it should have stayed. More crashes involving self-driving cars have come to light, a few of which have been fatal. One of the crashes, as reported by ABC News, occurred in a self-driving Tesla, where it steered its driver into a highway barrier while the driver was playing a game on his phone.

There are endless PSAs and safety campaigns against distracted driving, yet many car manufacturers continue to add technology to their products that allow people to drive distracted with more ease. This isn’t limited to lane departure technology either. Most new cars have Bluetooth technology, allowing you to make phone calls straight from your car, without ever picking up your phone.

Every major company selling self-driving cars, like Tesla, recommends drivers remain alert at all times. But when a car is marketed as autonomous, it makes sense that people don‘t think they need to pay attention to the road. Why should they, after paying a hefty sum for a car that is attentive for them?

While self-driving cars are not yet commonplace, there are still plenty of other ways that people are driving distracted. Even the seemingly safe option of using your car’s Bluetooth feature to make a phone call is not as safe as it seems. According to the National Safety Council, when someone is talking on their phone and driving (regardless of whether their device is hands-free), their field of vision can be narrowed by up to 50%. This is because the brain is being bombarded with too many stimuli at once, making it only able to retain a few elements of each simultaneously.

So why do car manufacturers keep adding this kind of technology? For the marketing value of saying your product is “high tech” or the most advanced? If so, where will they draw the line?

Now, it would be unfair to say this technology has no redeeming qualities. Lane departure warnings have been used to save many lives, including those of drivers who have fallen asleep at the wheel. However, this kind of technology being marketed as some sort of free pass to drive distracted, or as some sort of “car that pays attention, even when you don’t” is unacceptable, and it needs to stop.

An article on Carsurance.net reported that “every year, over 2.5 million car crashes are attributed to distracted driving, leading to approximately 9 deaths per day.” It is up to us to change that. So please, if you have this kind of technology in your car, think critically about how you use it. Don’t rely on your car to keep you safe. No text message, phone call, or Snap is worth the potential consequences.