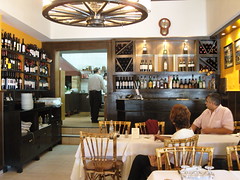 My name is Melina Scott. I know it means nothing to you, but I’ve worked at a restaurant for the past two years, intermittently working as a busser and a waitress. I’ve dealt with old women who don’t think their wine tastes right, 2-year-olds who are running around while uncaring parents look on, and all of the in between. As a caveat, I should state that I do work in a bar and restaurant, so I get the cream of the crop when it comes to drunken idiots and wanna-be David Bowie’s singing their hearts out by the jukebox. However, there are still certain etiquette rules that apply to any restaurant, and I’m here to lay them out for those of you who don’t know how to act. I’ve broken up these rules into a couple categories based on age, because different generations seem to break specific rules.

Stay off of your phones. Spend some quality time with your parents. They’ve missed you since you left for college.
Say please and thank you to your waitress. This seems to be a quality that is kind of being lost on our generation, somehow.
Please tip. Most of you are pretty good about this, but there’s the occasional Millennial or Gen-Z that leaves a two dollar tip on a thirty dollar bill. Don’t be that occasional Millennial or Gen-Z.

Personal Experience Story: There’s a couple most likely in their early twenties who come in often enough to be regulars. Besides their typical order of hamburgers with swiss and colby jack, respectively, I’ve never heard them say a word to each other. They are on their phones the entire dinner. Maybe talk a little, guys. It’s not gonna hurt you to get to know your partner.

Don’t whistle. Don’t snap. If you want to get the waitresses attention, the best thing to do is just make eye contact. We saw you, I promise. Just wait patiently like the adult you are.
Please talk to your waitress. Other waitresses have tables to wait on, and you, unfortunately, are not their main priority. Please do not waste their time. Granted, if it’s been thirty minutes and you haven’t gotten your card back, that may be an exception. But other waitresses often don’t have the pin to another waitress’s computer system, and they can’t really do anything to help you.
Ask for everything you need the first time your server comes to the table. Having them run back and forth for ketchup, then ranch, then another water, is a typical Karen move, and it really inconveniences us.
*Bonus* If you are a parent, please c o n t r o l your kids. I know this isn’t easy, but when they are running around, they only get in our way, and it becomes increasingly difficult to not trip over them and spill food all over the floor. Please just sit them down. They don’t know any better unless you tell to them to stop.

Personal Experience Story: This wasn’t my story, but a coworkers. At my place of business personally, we have a downstairs room that we use for parties of probably 13 or more. This means that we have whoever is running that banquet going up and down the stairs constantly, often with food in tow. A 6-top (table of 6) with two parents and four very rowdy children were bothering us during this particular instant. The parents would not control their kids, who were all probably eight and under and running all over the restaurant. You predicted it: as she was going downstairs for a banquet, my coworker tried to stop over a kid that had suddenly ran in front of her, tripped, and spilled about 8 plates of food on a large tray down the entire staircase. The parents did nothing.

Just because you’re old doesn’t mean you can boss us rudely around. We’re gonna start with that.
You are not the most important people in the restaurant. We have other tables.
Please don’t try the “I didn’t like it” trick after eating your whole meal. This is surprisingly common, and it never works. Never.
Don’t treat your waitress like she’s stupid. Many of our waitresses are in college right now. In fact, one is pursuing a degree in engineering. Just because we work in a restaurant doesn’t make us not good enough to be anywhere else.

Personal Experience Story: I waited on an older lady at one point who ordered the meatloaf dinner, but without sauce. This was a reasonable request and I wasn’t worried about it. However, when the order came, she complained that it was too dry…which kind of happens to meatloaf when you get rid of the sauce. I offered to get her something else, but she refused and continued to eat it. Later on, she pulled me back to the table to tell me how horrible the cooking was, saying the meatloaf was “so covered in rosemary she couldn’t taste anything else.” I apologized again, asked if she would like another dish, and again received a shake of her head and an angry, “No. I’m fine.” Naturally, I went back to the kitchen to ask about rosemary in the meatloaf. There wasn’t any in the recipe at all. When I brought the check at the end of the meal, she asked to see my manager about the service and food. I politely got my manager, who told her that she couldn’t discount anything because they had eaten their entire meal. She proceeded to yell at my manager and me in front of the whole restaurant, and go home and complain about us on facebook. She wasn’t invited back.

Don’t try to seat yourself unless there’s a sign saying to do so. Usually there’s some sort of wait list, especially at fancier establishments, and you’re probably messing up a hostesses plan.
Don’t loom over a table that your busser is trying to clean for you. If you’ve been waiting, we promise you that no one will steal it. We won’t let them. You standing there only gets in the way and prolongs your wait for a delicious burger.
Don’t go get drinks from the bartender if you can help it. Your waitress is probably trying her best to keep up, and having to go ask the bartender what he served you makes things more difficult for us.
Don’t take off your shoes in a restaurant. Just…don’t.
Please don’t flirt with your servers and bartenders. It’s not going to get you a discount, and it’s just uncomfortable for everyone. Especially your girlfriend or boyfriend sitting across from you.
Don’t touch us either. That’s weird. You wouldn’t touch the lower back of a young boy, so don’t pretend you don’t know any better with a young woman like myself and my coworkers.
I know you’ve been trying to get onto Comedy Central for 18 years now, but don’t take it out on us. We’re all getting tired of forcing laughter at your “I didn’t order a bill” jokes. Just let us serve you in peace.
If there’s a jukebox at the restaurant you’re at, don’t even think about playing YMCA. Don’t do it. No one will dance but you and your drunk buddies, and it’ll just be awkward for everyone.
Inside voices people. Inside voices.
Push in your chairs when you leave. This isn’t kindergarten.
If you are waiting on a table, don’t ask the hostess 15 times if your table is ready when you see one open up, and please do not try to seat yourself. We will come get you when it’s time.
Lastly, and most importantly, just have some patience with the whole ordeal. The restaurant business is no easy task, and some smiles and patience on your end will get you exponentially better service.

I genuinely thank you for hearing me out on this. I think I speak for most servers when I ask for these things, and hopefully I’ve cleared up some stuff for you, so that your dining experience at any restaurant can be better on both ends. If you’re nice and respectful to us, we’ll be nice and respectful back, guaranteed.