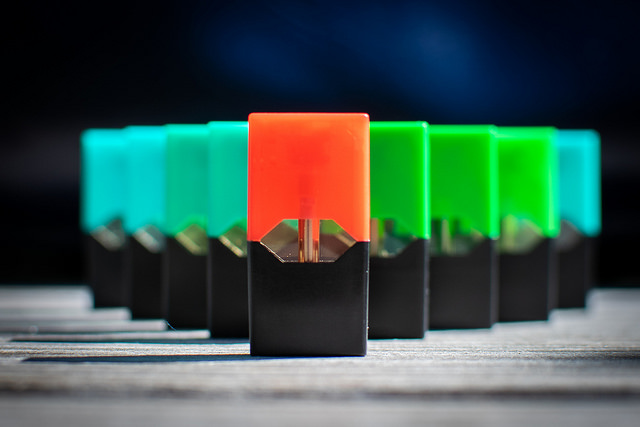 It has been nine months since my article Vape Nation was published, in that article I discussed vaping,it’s possible consequences, its legality and current research on the subject as well as the popular methods at the time. In the last 9 months much of that has changed, there is a new wave of vaping, the product has changed along with how it is used.

The biggest way vaping has changed is a new device called The Juul. The Juul is about the size of a thumb drive and uses pods that contain almost as much nicotine as a pack of cigarettes. Many teens consume a whole pod or more everyday. One anonymous source stated that she “was buying at least 2 packs of pods every week” .The juul has made vaping easier, more widespread, and more common in the classroom and around the school. Another Helena high student said “almost all of my friends vape” the juul is popular at school because it does not let out much vapor and gets its users “buzzed” or “domed” extremely quickly due to the large doses of nicotine. Juul claims not to market to teens but with flavors like cool mint, mango, and fruit medley, it’s hard to not assume these are meant to get teens hooked.

U.S. health officials are officially calling teen vaping an “epidemic”. Last week the FDA  required the five largest e-cigarette manufacturers to produce plans to stop underage use of their products within 60 days. Vuse, Blu, Juul, MarkTen XL, and Logic e-cigarette brands reportedly account for 97 percent of U.S. e-cigarette sales. If the companies’ plans do not reach the necessary standards , the FDA can block sales of the products and enforce a new requirement that companies have to provide detailed design and health data about their products before selling them. It is unclear what would be on the potential health label as the long term effects are not yet revealed.

Vaping at helena high grew in popularity early last year, according to Mrs. Thennis an assistant principal vaping is an epidemic and has the stats to back it up. In the 1st quarter of school last year four students were caught vaping. That number increased slightly in second quarter with six, but then ballooned in third quarter when 20 students were caught vaping. In the fourth quarter just 10 students were caught, Mrs Thennis believes it was due to winter being over and students choose to go outside to vape. So far this year Mrs Thennis has personally dealt with two student vapers. Both were freshman and both received minor in possession charges.

Vaping has become the norm for many teens. These teens may not be aware of the health risks that come along with vaping. If teens are caught, they will receive an MIP, but even that is not enough to stop all vapers.“ it’s such a new trend that there are no statistics, or knowledge or research that’s been done on long term effects. To me, it’s just not worth the risk.” cautioned Mrs. Thennis